Published: 31st of January by Camogie

It was a much anticipated round game for both sides last Saturday evening when the East Clare amalgamation Feakle/Killanena travelled to Gurteen to take on the maroon and white of St. Joseph’s Doora Barefield in this third Intermediate Championship Round Game.

Having lost by a mere point to Doora Barefield in the Intermediate League Final last May, Feakle Killanena felt hard done by and therefore had a score to settle in this championship run against St. Joseph’s.  But Joseph’s had different notions and straight from the throw in dominated this game notching up seven points in concession from Ciara Duggan, Erinn Hennessy, Louise Woods as well as two from Sarah Hoey playing a leaders role at centre forward before free taker Aisling Hannon popped over two more.

Feakle Killanena still couldn’t reply as Hoey ran through the East Clare defence to raise the green flag for Joseph’s leaving it 1-7 to no score after just 15 minutes of play.

Strong defence from Orla Moloney and Kate Dillon in corner backs and full back Megan O’Brien ensured their goalie Karen O’Brien was idle for most of this fierce battle but Feakle/Killanena gathered composure however and earned two frees converted by Regan Conway as well as a point from play from corner forward Lorna McNamara.  This however was responded quickly with a further point from Joseph’s Duggan this time from a free keeping Joseph’s firmly on top.

As half time approached centre forward for Feakle/Killanena Robyn Conway made her way towards the nets and earned herself and her club a badly needed goal to bring Feakle/Killanena closer to their opponents but true to form Joseph’s slotted over yet another free from reliable Hannon to see the curtains close at the interval 1-9 Joseph’s, 1-3 Feakle/Killanena.

The first score of the second half went to the East Clare girls when Regan Conway stepped up to convert a free but once again Joseph’s slipped into gear and continued the dominance they had set out from the very start of this encounter.  Midfielders Sīofra Nī Chonaill and Orlaith Lynch fed ball into their energetic forwards and the fruits of their labour resulted in Hoey slotting over a point and Duggan on a role with two more successful frees before eventually rattling the net with the sliotar.  Doora Barefield were comfortably on top at this point with 2-12 to 1-4 advantage and were liable for complacency but words like that didn’t enter their vocabulary and their strong half back line Eimear Casey (captain), Chloe Towey and Aisling Hannon saw off any attempted attacks young ZiYan Spillane, Robyn Conway and Claire McNamara from Feakle/Killanena created.

There were to be three more points for Feakle/Killanena in this encounter, two frees from Regan Conway and a point from play from her first cousin Robyn before the Joseph girls once again regained composer and cruised into full control blasting two goals in concession from substitute Aisling McMahon first and then an Aisling Hannon free from midfield caught goalie Shauna Canny unaware to put this game firmly on the front foot for Doora Barefield.

Corner forward for Doora Barefield Laura Hayes broke the next ball across to her teammate Ciara Guilfoyle for her to slot her first point of the evening over the bar followed swiftly with another point from Aisling McMahon to draw the line on a remarkable game of camogie.  Final score St. Joseph’s 4-14 Feakle/Killanena 2-7 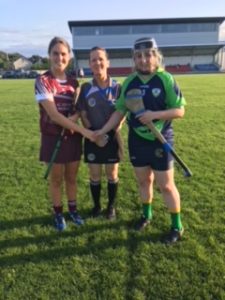