Having comprehensively beaten Feakle/Killanena in an Intermediate round game just the evening before, this group of Junior girls were determined to close out the weekend in much the same fashion and this they duly did on Sunday evening last Sept. 2nd

Straight from the get go Joseph’s were out of the traps and with onfire forwards nothing or nobody was going to stop their weekend of winning streak.

In a half that saw the green flag raised four times for Joseph’s it was a superb performance all round.  A goal from Alannah Meaney, another from Amy Lenihan and two from Ciara Whelan left the Feakle/Killanena squad scrambling for answers.  Another point each from Lenihan and Whelan followed by a point from Mūirne Nī Chonaill left the half time score St. Joseph’s 4-3 Feakle/Killanena 0-2.

The second half was to be no different, these girls continued on their winning ways with Alannah Meaney getting her second goal of the evening from a long range free and Kiera McGrath scoring two class points from play before Whelan added another point to her tally, saw the maroon and white girls comfortably in front as Āine Nic Cormaic blew the final whistle on the evening. 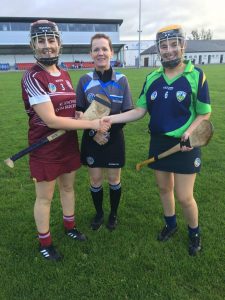