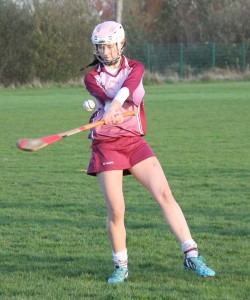 After the success of last year and huge talent emerging within the club it was decided to enter both Junior and Senior Camogie teams this year. The Juniors followed on the heals of the Senior win the week previous. A strong first half display of shooting played a big part in helping St. Josephs to a five point win over Wolf Tones in Round two of the Junior B league in Shannon on Sunday last. The visitors led 4-4 to 1-4 at half time, following an array of scores from forwards Ciara Whelan and Keira McGrath. Despite being outplayed for most of the half, Wolf Tones remained in touch with opening scores from their top scorer Rachel O’Brien. Ciara Whelan goaled for St. Josephs to the corner of the net from the hardworking Laura Hayes and Aoife Shannon, and with impressive defensive work by Orla Meehan and Orla O’Neill, Whelan tagged on another 1-1. With five minutes remaining of the opening half St. Joseph’s Ciara Whelan pulled on a high dropping ball to the back of the net. Both Whelan and O’Brien exchanged points once more. Wolf Tones kept the pressure on and had the final say of the half when they were awarded with a goal at the half time whistle.

The home side had the brighter start to the second half with a point from Lizzy Danager, followed by a goal to the St. Joseph’s net by Emily Hayes. Eight minutes into the second half, Ciara Whelan struck for the winners fifth goal from a well taken free. Wolf Tones fought back and mid way through the the half Lizzy Danagher pointed from a free before they were awarded a penalty which Rachel O’Brien rattled to the back of the St. Joseph’s net, leaving just three between the sides. Ciara Whelan was St. Joseph’s chief scoregetter and added a further 1-2 in the third quarter to her tally of 5-6 for the tie. Michelle O’Neill and Laura Hayes had impressive performances on the day for St. Joseph’s as did goal keeper Karen McMahon. Wolf Tones had the last score of the game with a goal in the remaining minutes but was not enough to deny a St. Joseph’s win.