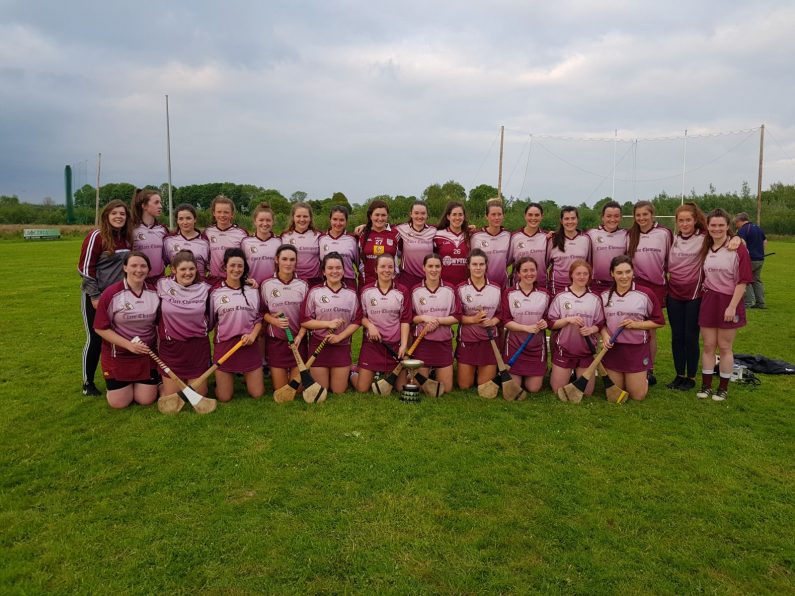 It had to take an injury-time free to finally seal victory for our St. Joseph girls after a fast paced dramatic Division 2 Final on Sunday evening last May 27th against Feakle/Killanena.

In a decider where the lead changed hands no less than five times and the sides were level on five more, it was our very own Aisling McMahon’s free from an awkward angle on the wing in the 62nd minute that saw the maroon and white girls snatch the spoils.

Played in ideal conditions, freetaking proved crucial for both sides throughout the game and with Feakle/Killanena opening the score with a point from a free it was duly followed with McMahon doing the same for the Joseph girls.

The East Clare amalgamation launched blistering attacks but were constantly bombarded with the Joseph defence lines, Orla Moloney, Megan O’Brien and Kate Dillon in particular winning back possession and working ball upfield to the awaiting full forward line of Erinn Hennessy Ciara Guilfoyle and Captain Caoimhe Hoey, and it was Guilfoyle that raised the green flag just minutes into the first half with a handpass into the back of the net.

Feakle/Killanena replied with a point from play as well as four more from frees before Aisling McMahon once again stepped up to secure her second converted free of the evening leaving half time score Feakle/Killanena 6 points, St. Joseph’s 1-2

The Parish girls restarted the second half with vigour, from the throw-in they were on the attack and a goalmouth scramble saw Hannah Meaney raise the green flag again, this time putting her team two points in front.  But once again the East Clare amalgamation managed two points from play bringing the sides to level yet again.

Aisling edged St. Joseph’s in front with yet another converted free but from the puck out Feakle/Killanena were on the attack driving forward putting goalkeeper Karen McMahon under pressure having to get a vital touch to deny what was a sure on goal saving the day for the maroon and white girls.

It took serious defending again in this half from Fiona Tuohy, Meadhbh O’Connor, Eimear Casey and Sīofra Nī Chonaill as well as the aforementioned Kate Dillon, Megan O’Brien & Vanessa Meaney to keep the sliotar away from Karen McMahon’s goal mouth as the pressure was felt on every blade of grass in Fr. McNamara Park.

A seesaw pattern was maintained with first the opposition converting a free before McMahon duly responded with her own conversion before Feakle/Killanena did the same and then they scored a point from play leaving Joseph’s trailing by the narrowest of margins as the clock ticked by. Orlaith Lynch and Louise Woods in midfield were thorns in the side of Feakle/Killanena powering through on solo runs and laying ball off to the half forwards Sarah Hoey, Aisling McMahon, Laura Hayes and Aoife Shannon.

McMahon cooly gained parity however on the hour mark and never flinched when Feakle/Killanena fouled in the 62nd minute and she stepped up to prove she was the hero of the evening converting same to secure a memorable victory with only the point in it.

Afterward Captain Caoimhe Hoey was handed the Division 2 League cup by Clare Camogie PRO Brīd McNamara who complimented both sides on a tremendous nailbiting final that went right down to the wire before complimenting all those who had helped reach this defining moment.