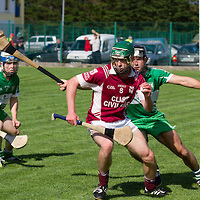 St. Joseph’s had a hard-earned win over Ruan which puts them now right in the mix for a place in the play-off stage. David Conroy played a key role in the win with a large total tally of thirteen points to his name. He was not only the top scorer but scorer the equaliser and subsequently the winner.

In addition to Conroy, Brian Clancy, Aaron Landy, the Hannon twins and Alan O’Neill especially in the first half were instrumental for the Parish.