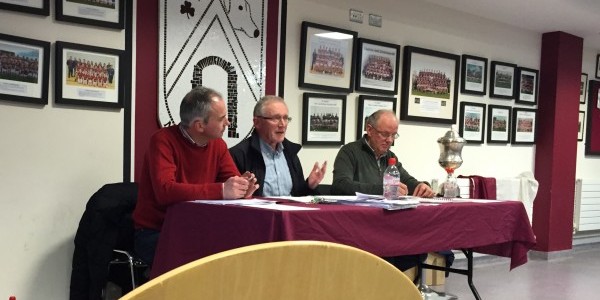 Approx 60 people were in attendance. It was to be the Club Secretary’s last AGM report as Dan O’Connor stepped down after a number of years service and commitment to the parish.

Re-elected Chairman of the Club, Martin Coffey said ‘I must acknowledge the extraordinary service Dan has given the club over the past two decades. Dan was Secretary from 2004 to 2011 at which point his son Donall allowed him a short breather! Reinvigorated, Dan resumed office in 2013 and served for the past two years. Any tribute of mine to Dan’s work would be grossly inadequate as it is simply impossible to summarise his contribution to this club over the years. Therefore I, on behalf of all club members, will simply thank Dan for his unstinting service and wish him and his family health and happiness for the future.’

The management teams for 2016 are as follows;