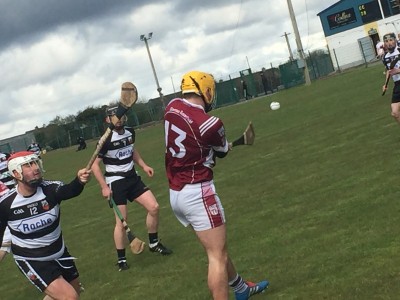 It was a cold but dry day in Clarecastle for this round two Clare Champion Cup league encounter.

St. Joseph’s eventually got on the scoreboard in the 7th minute through a converted free from David Conroy. He followed this with another, this time from play a minute after.

The 11th minute was a tough one for the Parish to take as Clarecastle pointed from a free and also Aaron Healy put a nicely worked goal past Michael Rosingrave in the St. Joseph’s goal.

Ivor Whyte took over the free taking and pointed 3 over the next three minutes. Bobby Duggan was having a great game and slotted over more scores n the 13th & 23rd minute.

The 1st half concluded with another Ivor Whyte point from a free counter acted by a Clarecastle point from play.

Clarecastle started the second half brightly with a point per minute; two from Bobby Duggan and one from Patrick Healy. St. Joseph’s started to commit frees and again were punished by the midfielder.

The full back line of Declan Meehan, Mark Hallinan and Ben Baker were under immense pressure throughout. This came to a head when Bobby Duggan was through on goal and was brought down inside the square by Declan Meehan. Meehan was shown yellow and Bobby dispatched the penalty to the net.

This was certainly not the start to the second half St. Joseph’s had hoped for. Kevin Dileen scored a point from play on the 14-minute mark. 15 minutes into the second half the score was St. Joseph’s 0-09, Clarecastle 2-20. Things obviously were not looking too good at this stage but they were about to be made worse with Alan O’Neill being shown a red card on the 19-minute mark.

Derek Quinn from Clarecastle took a well-taken goal after 24 minutes of play in the second half. Jarleth Colleran was shown a yellow for a high challenge soon after.

St. Joseph’s last score was 9 minutes before the end with Ivor Whyte converting.

The final score ended Clarecastle 3-26, St. Joseph’s 0-09 which didn’t correspond with the scoreboard but the referee, Kevin Walsh assured us that was wrong and the he had the correct score.