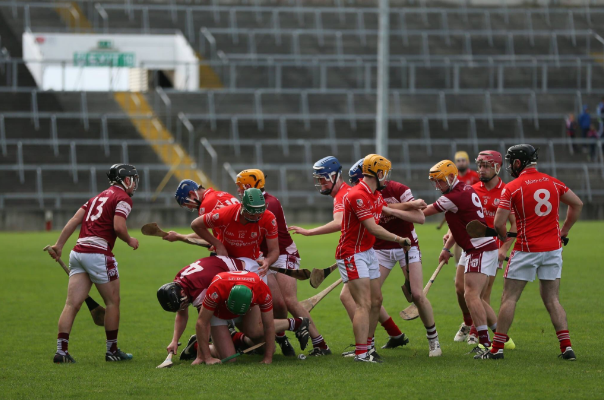 This Munster Club Intermediate Hurling Championship had to be brought to Extra time  to separate St Josephs Doora/Barefield and Limerick Champions Monaleen.

Tom Hannan was a towering strength with a tally of 2-03 which had the Parish ahead in the opening thirty minutes as they led 2-05 0-08 at the end of the first half.

Monaleen had played with the aid of the gentle breeze in the first half.

The sides were level on four occasions in that first half but goals in the 10th and 20th minutes had the Clare side ahead.

The only score of the final 10-minutes was a Davy Conroy point to leave the Clare side three points clear at the break.

The Half time score in the Munster Club Intermediate Quarter Final was Monaleen 0-8 St.Joseph’s 2-5

Andrew La Touche Cosgrave raised a green flag for Monaleen on the thirty ninth minute. Doora/Barefield responded through a penalty from Alan O’Neill which hit the back of the net at the other end.

On the change of ends points from a Conroy free and another from Hannan moved St. Joseph’s 2-7 to 0-8 clear.
O’Neill and sub Niall DeLoughrey added points and the Clare side were five points clear entering the final quarter.

But St. Joseph’s weren’t to score in the final 25-minutes of action – including almost eight minutes of injury time.

Monaleen continued to dominate in extra time with four successive scores to move 1-19 to 3-9 clear.

Finally after 32-minutes without a score Davy Conroy had Doora-Barefield back on the scoresheet. When O’Neill added another it was 1-19 to 3-11 at half time in extra time.

It was a two point lead for Monaleen heading into the second period of extra time.

At the start of the second half Ger Collins goaled after 27-seconds and that was good enough to Monaleen through.

While they failed to see out this game in normal time The Parish achieved their main goal in returning to the senior ranks, a long run in Munster would have been ideal preparation for the 2017 Clare SHC but they will be content nonetheless to be back in top grade.