St. Joseph’s first round game of the championship was re-scheduled due to an unplayable pitch and this fixture was re-organized for Sunday. The game took place in Gurteen G.A.A Complex.

Eoin Burke was first on the score sheet with a point in the opening 4 minutes when he pointed to level the scores. Tony Butler registered St. Joseph’s second score from a free. 12 minutes into proceedings, corner forward Ethan Coughlan raised the green flag for Doora Barefield. He was also on the score sheet soon after with a point. Eoin Burke added another point to his tally half way through the first half. St. Joseph’s Donall O’Driscoll was on target with another point.

St. Joseph’s second goal came from Joey Keane early in the second half. Corofin were to raise a green flag themselves from a free. Matthew Power added a point for The Parish.

The team sheet is available in the media image and the following substitutes were introduced; 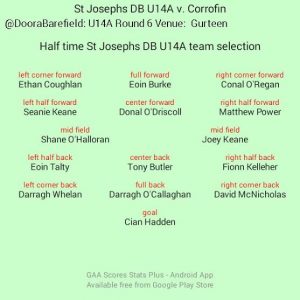