Cooraclare left it late as they edged past St Joseph’s Doora/Barefield on Sunday evening in the Clare Senior Football Championship first round.

Despite leading for forty eight minutes St Joseph’s Doora/Barefield still managed to lose out to Cooraclare.

Strengthened by the return of the Lyons brothers, Greg and Enda the Parish dominated proceedings from the throw-in and limited Cooraclare to one point inside the opening twenty minutes. They continued to control matters until the half-time whistle as they held a 0-06 0-03 advantage.

Doora/Barefield only kicked a single score in the second thirty as Cooraclare clawed their way back. Rory Donnelly converted a penalty on the forty ninth minute to put the Milesians back on level terms and took the lead for the first time three minutes later and never let it drop from here.

Beaten finalists last year Cooraclare completed their aim heading into Round One that being to ensure it was the winners and not the losers draw that they would be in. With several injuries and a suspended Pearse Lillis it would have been easy for Ger Lawlor’s charges to roll over but they refused to do say and got the rewards. 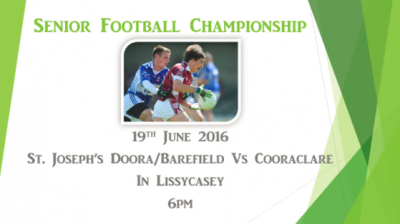