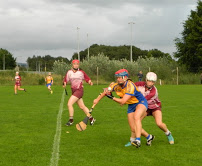 Sixmilebridge and St. Josephs contested the opening round of this year’s senior championship in Shannon Camogie pitch on Friday evening.  Last year’s intermediate winners St. Josephs put in an impressive performance in their return to senior ranks, it was a close encounter throughout and with little separating the teams as the half time whistle sounded, Sixmilebridge held a two point advantage 0-8 to 0-6. The bridge playing with the aid of the wind opened the scoring inside the first minute with a point from Mary O’Connor, Chloe Morey added three further points, two from frees mid way through the half before St. Josephs’s Louise Woods pointed from a free. Minutes later, Woods added a further from a free, but Maire McGrath responded with two points for the bridge. With five minutes remaining of the half St. Joseph’s Erinn Hennessy and Maire McGrath exchanged points. With strong defensive displays from Vanessa Meaney, Megan O’ Brien and Kate Dillon, the parish kept the pressure on in the last minutes of the half with points from Orlaith Lynch (1) and Woods (2) before Maire McGrath pointed to leave two between the sides.
At the resumption of play, Chloe Morey pointed twice in quick succession stretching the lead to 4, but minutes later Orlaith Lynch struck for goal and with the score 0-10 to 1-6 and plenty of time left, the match was definitely up for grabs once again. The latter stages of the second half were gripping as St. Josephs reeled the winners in. But, with five minutes to go Morey pointed three unanswered frees topping the scoring chart with 0-8 (5f) over the hour. This really was a tie that could have gone either way, as both sides missed plenty of scoring opportunities.
Ciara Guilfoyle, Caitriona Hennessy and Michelle O’Neill had strong performances for the parish while Chloe Morey, Maire McGrath were prominent throughout for the winners.
St. Josephs: Ann Marie McGann, Orla Moloney, Megan O’Brien, Kate Dillon, Aisling McMahon, Eimear Casey, Vanessa Meaney, Louise Woods (0-4)3f,Michelle O’Neill, Roisín Kennedy, Sarah Hoey, Ciara Guilfoyle, Erinn Hennessy Capt. (0-1), Orlaith Lynch (1-1), Caitríona Hennessy.
Subs: Karen O’Brien for Roisín Kennedy.