St. Josephs got their 2016 season off to a good start with a comprehensive win over Whitegate in the opening round of the league on Sunday last in wet conditions in Whitegate.  A strong first half display saw the visitors open a 12 point lead by half-time, with a score of 2-8 to 0-2.  An outstanding defensive performance helped secure this win. The winners did slip a little in the opening of the second half and conceded four points in succession but they finished strongly, with a goal from team captain Erin Hennessy, and a brace of valuable points from Louise Woods.
Early points from Erin Hennessy (3) & Louise Woods had St. Josephs three clear after seven minutes. Ciara Whelan goaled for the parish side with a high dropping ball over the Whitegate keeper into the bottom corner of the net. A further seven minutes went by before the home side opened their account, when Susan Fahy pointed from a free.
Erin Hennessy and Louise Woods added three further points to lead 1-8 to 0-1 with five minutes remaining in the half.  A goal by Louise Woods extended St. Joseph’s lead as the half-time approached.  Whitegate had the final say of the half, when Susan Fahy added a point from free to leave the half-time score at 2-8 to 0-2.
The home side returned with a brace of points in the opening of the second half with points from Lauren Solon(2f) and Susan Fahy (2). But St. Josephs continued to enjoy dominance with a point from Erin Hennessy, before Louise Woods landed another to put the visitors ten points clear in the opening ten minutes of the half. Roisín Kennedy and Susan Fahy exchanged points, as the third quarter drew to a close.
St. Josephs struck to kill off the tie when team captain Erin Hennessy struck for goal with minutes remaining. The home side battled to the end and were rewarded with a well taken goal by Lisa Donnellan. St. Joseph’s defence, as a whole, played well with Eimear Casey and Megan O’Brien getting through an amount of work, as did Laura Hayes, Roisín Kennedy and Sarah Hoey. 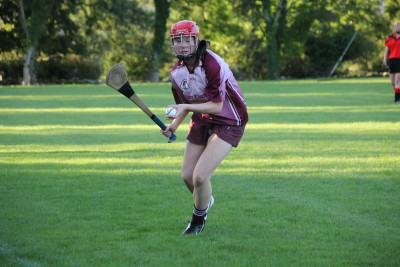